You are here: Home / Music / Classic Rock / Song Of The Day by Eric Berman – “Little Latin Lupe Lu” by The Righteous Brothers 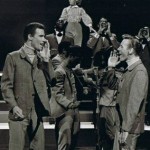 Bill Medley and Bobby Hatfield were best known for their smooth blue-eyed soulful sounds as The Righteous Brothers performing heartfelt ballads. But they could rock out too as evidenced by this Bill Medley original that was not only a hit for them (#47/1963) but also The Kingsmen (#49/1964) and Mitch Ryder & The Detroit Wheels (#17/1966). It was also a regional hit for the Minneapolis garage group The Chancellors in 1964, who for my money had the best version of all. (http://youtu.be/zK57Dz4KsK0). And nothing could top a sweaty Bruce Springsteen fronting the E Street Band on the 1977 “Darkness” tour encoring with this song. (http://youtu.be/bmDqLjwrmZ8)