You are here: Home / Music / Folk / Song Of The Day by Eric Berman – “Scotch And Soda” by The Kingston Trio 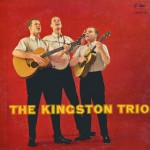 Before The Beatles…there was The Kingston Trio! The Trio of Dave Guard, Nick Reynolds and Bob Shane were the most recognized act of the initial folk boom of the late 1950s causing a sensation throughout college campuses. Their brand of exuberantly sung folk songs mingled with a healthy dose of good natured “aw-shucks” humor offered pure entertainment and insured them a place on the charts and on concert stages. Before the Trio ever recorded a note in the studio, they got a booking based on their performances in frat houses opening for Phyllis Diller at a San Francisco club called The Purple Onion. Sending 500 postcards out to everyone they knew inviting them to the week of gigs, they ended up with a sold out engagement causing a sensation for themselves. Their hits included “Tom Dooley,” “The M.T.A.,” “The Tijuana Jail,” “Where Have All The Flowers Gone,” ”A Worried Man,” and many others. This one comes from their 1958 debut album called “The Kingston Trio.” In 1961, Dave Guard left the group and was replaced by John Stewart a major talent in his own rite who went on to write classics like “Daydream Believer.” I have had the pleasure in my own career of anthologizing The Kingston Trio on CD for both Reader’s Digest and Time Life Music. Although touring members of The Trio still exist, the last version with original member Bob Shane stopped touring in 2004.