You are here: Home / Music / Classic Rock / Song Of The Day by Eric Berman – “Seam Crooked Sam” by Captain Beefheart & His Magic Band 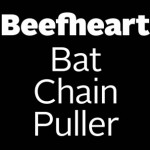 As if it wasn’t enough that last year finally saw the release of the great lost “Smile” album by The Beach Boys, this year we get the original “Bat Chain Puller” by the good Captain Beefheart. The story in a nutshell involves financial finagling back in 1976 by Herb Cohen, the manager of both Frank Zappa and Captain Beefheart. Zappa and Beefheart had just finished a joint tour in 1975 that resulted in the “Bongo Fury” album. Zappa resumed touring while Beefheart went into the studio with Jeff “Moris” Teper and Denny Walley on guitar, John Thomas on keyboards and John “Drumbo” French on drums. While Zappa was out touring Europe, Herb Cohen rented out Zappa’s PA system to another band. He used the finances from the rental combined with Zappa’s publishing income to finance the Beefheart recording sessions. When Zappa found out, he was livid. Herb Cohen then proceeded to change the locks to the recording studio and blocked Zappa’s access to all of his recordings including the tapes for “Bat Chain Puller.” A long court battle ensued resulting in the tapes reverting back to Frank Zappa several years later. By this point, Beefheart and a different iteration of The Magic Band went into the studio and re-recorded some of the “Bat Chain Puller” tracks along with several new songs resulting in the 1978 album “Shiny Beast (Bat Chain Puller)” while the original “Bat Chain Puller” tapes languished in the vaults. So here we are in 2012 and we finally get to hear the original “Bat Chain Puller” including this song that did not make the “Shiny Beast” album. It was worth the wait…Captain Beefheart lives!