You are here: Home / Music / Film Soundtrack / Song Of The Day by Eric Berman – “Six Women (Me & Henry The Eighth)” by Cliff Edwards 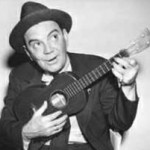 Cliff Edwards was a crooner, musician, voice actor and a star of film and TV. He got his start in the early 1920s playing ukulele in vaudeville acts in Chicago and became known by his stage name, Ukulele Ike. He was largely responsible for the popularity of the instrument during the era. He was probably best known as the voice of Jiminy Cricket in the Walt Disney film, “Pinocchio” where he sang “When You Wish Upon A Star.” He also voiced the head crow in Disney’s “Dumbo” and sang the song “When I See An Elephant Fly.” He scored a number one hit in 1929 with his version of “Singin’ In The Rain,” and appeared in numerous films for RKO. Here’s a hilarious 1934 novelty from George White’s “Scandals” which was a film revue not unlike “Ziegfeld’s Follies.”