You are here: Home / Music / Dream Pop / Song Of The Day by Eric Berman – “So In Love” by Patti Page 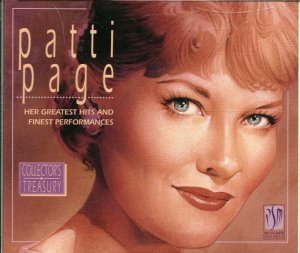 Patti Page was different things to different people. To some, she was the first cross-over country star whose plaintive country hits reached an even wider audience by crossing over into the pop charts (“The Tennessee Waltz”), to others she was a sugary-sweet singer who recorded a lot of dross (“Doggie In The Window”), and yet, to others she was a pioneer of multi-track recording, painstakingly recording her voice numerous times over existing recordings of her voice to create layered symphonies of sound with breathtakingly perfect harmonies (“Old Cape Cod”).

She was also an adept vocalist comfortable with belting out big brassy arrangements (“Confess”) and silky smooth pop confections (“You Belong To Me”). Page was all of these things, and on today’s Song Of The Day, she was also a sultry and sophisticated jazz vocalist capable of manipulating her precious pipes to fit the nuances of songs less talented vocalist couldn’t possibly pull off. Patti’s version of “So In Love,” from the musical Kiss Me Kate, was recorded in 1948.

“The Singing Rage, Miss Patti Page” was the best-selling female artist of the 1950s, selling over 100 million records. Her recording of “Tennessee Waltz” sold 10 million copies alone, even though it started its life as the B-side of the Christmas novelty song “Boogie Woogie Santa Claus.” Once DJ’s flipped the record, the rest was history!

Page benefitted by working under the tutelage of record producer, Mitch Miller, who urged her to tackle music of all different kinds of genres resulting in hits like “Down The Trail Of Aching Hearts,” “Detour,” “Conquest” (mariachi flavored novelty, covered by The White Stripes of all groups), “Changing Partners,” “Cross Over The Bridge,” “Let Me Go, Lover!,” “Allegheny Moon,” and “Hush, Hush Sweet Charlotte.”

It was Miller who introduced her to Les Paul and multi-track recording when background vocalists were unavailable during a recording strike in the late 1940s, resulting in monster hits like “Confess,” “Mockin’ Bird Hill,” “Old Cape Cod” and “With My Eyes Wide Open, I’m Dreaming.”

In addition to her music career, Page was a mainstay of TV variety shows, most notably “The Patti Page Show.” On the movie screen, she appeared opposite Burt Lancaster in “Elmer Gantry” (1960) and co-starred with David Janssen in “Dondi” (1961). She also had a supporting role in the comedy “Boys’ Night Out” (1962) with Kim Novak and James Garner.

While working with Reader’s Digest back in 1995, I had the pleasure of anthologizing Patti Page’s career into a 63 track, 3-CD collection including every one of her important chart hits, called “Patti Page: Her Greatest Hits and Finest Performances.” All of the above named hits are on the collection, and if I may say so, it is well worth seeking out.