You are here: Home / Music / Classic Rock / Song Of The Day by Eric Berman – “Solar Prestige A Gammon” by Elton John 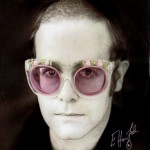 This is the “Seinfeld” of songs, meaning that it is a song about…nothing! By the release of “Caribou” in 1974, Elton John’s career was so white-hot he could do no wrong. Hence, Elton unleashed a flimsy, tossed-off album chock full of half-baked songs (by a fully baked superstar), that topped the charts all over the world. “Solar” is the “Mairzy Doats” of the 1970s, and if you are too young to know what that is (and you probably are), you should check out that precedent-setting Merry Macs’ hit from 1944 on YouTube. The song, whose lyrics are purely gibberish, was inspired by none other than The Beatles and their “Abbey Road” track “Sun King.” Elton thought it would be fun to sing a song comprised of real words strung together to mean nothing, so Bernie Taupin wrote up a set of on-demand nonsense lyrics to fulfill his wishes. Sure, it’s a goof performed by the ultimate goofball, but if this musical turd doesn’t manage to put a smile on your face, you are far more jaded than I am.