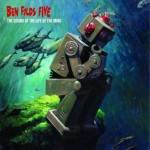 It’s been 13 years since Ben Folds, Darren Jessee and Robert Sledge recorded together as Ben Folds Five. Last year, the trio got back together to record three new songs for the Ben Fold’s retrospective three-disc set “The Best Imitation Of Myself.” Having found the experience pleasing, the trio regrouped this year to record “The Sound Of The Life Of The Mind,” their first record since 1999’s “The Unauthorized Biography of Reinhold Messner.” While Folds was signed to Epic Reocrds as a solo act, the band found themselves labeless. So last August they began an interactive pre-sale campaign to release the record themselves and ended up finding distribution through Epic Record’s parent company SONY Music. Over the years, Folds has released numerous solo records establishing himself as the musical stepchild of Billy Joel and Elton John. If Folds had been making music in the 1970s, he would be every bit as much of a superstar as they are today. Back in the mid-1990s, I saw the unlikely triple bill of Ben Folds Five followed by Jewel as the opening acts for Neil Young and Crazy Horse. I remember liking Folds a lot then…and I like him even more today.