You are here: Home / Music / Alternative / Song Of The Day by Eric Berman – “Something Came Over Me” by Wild Flag 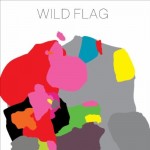 Featuring members of Sleater-Kinney, Helium and The Minders, Wild Flag joined forces last year labeled a supergroup. I always thought supergroups happened when members of really well-known bands came together to form new bands with even more marquee strength. With Wild Flag, Sleater-Kinney is the only band of the three that ever made a dent into the larger consciousness of rock fans…but I quibble. More interesting is ex-Sleater-Kinney band member, Carrie Brownstein, who currently stars with SNL comedian Fred Armisen in the hilarious sketch comedy show “Portlandia” which spoofs the hipster culture of Portland Oregon.