You are here: Home / Music / Easy Listening/Pop / Song Of The Day by Eric Berman – “It Must Be Him” by Vikki Carr 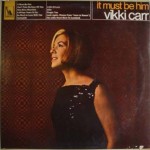 Ms. Carr was born Florencia Bisenta de Casillas Martinez Cardona in El Paso Texas and was a humanitarian regularly entertaining the troops in South Vietnam. Phil Spector heard her recording her first hit, “He’s A Rebel” in the studio in 1962 and quickly cut a cover version with The Crystals bringing it to the top of the charts. Many of her hits were cut in Spanish as well as English, a move that was unusual for its time making her a popular Latin American entertainer. She appeared on countless TV variety and talk shows throughout the 1960s and early 1970s and took this song to the number one position in 1967 scoring three Grammy Nominations along the way. She is still very much active on the entertainment circuit as well as with her fundraising activities for various charities.