You are here: Home / Music / Alternative / Song Of The Day – “Spill The Wine” by Eric Burdon & War 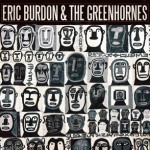 THIS IS NOT THE SONG OF THE DAY! I REPEAT, THIS IS NOT TODAY’S SONG OF THE DAY! I couldn’t find the ACTUAL Song Of The Day out there in YouTube land, so I figured I’d make do with this classic since the lead vocalist on this record is the very same vocalist that you would’ve heard singing on the actual song of the day. (And, this song really kicks ass!). The ACTUAL Song Of the Day was supposed to be “Out Of My Mind” by Eric Burdon & The Greenhornes. I wanted to begin the ACTUAL Song Of The Day by saying that while the world goes ga-ga over The Stones’ 50th Anniversary shows, and the two somewhat lame new tracks they’ve just released, another legendary British Invasion hero just released a limited edition four-song EP on Black Friday Record Store Day backed by The Greenhornes. For those who don’t already know, The Greenhornes are an Ohio band that have been around for over fifteen years. Two of the band’s members are Jack Lawrence and Patrick Keeler who left the group to form The Raconteurs with Brendon Benson and Jack White. By now you probably know that The Raconteurs recorded two superb studio albums, released a couple of live discs and toured the world a couple of times. Now that The Raconteurs are on hiatus, The Greenhornes reformed to record this four-song session with Eric Burdon on vocals with Raconteur, Brendon Benson, on hand to handle the production and mixing duties for the session. I would love to tell you that the Eric Burdon & The Greenhornes EP hits the ball out of the park in the sheer greatness quotient, but it doesn’t even come close. Don’t get me wrong, three of the four Eric Burdon-penned tracks on the EP are quite excellent (especially today’s ACTUAL Song Of The Day), but the fourth track on this EP is some kind of piss-take that should have never been released. What they were thinking by releasing it is really beyond me. That said, the other three songs show that Burdon is still a great vocalist, right up there with Mick Jagger…so roll over Mick, the original Animal is on the loose and back in action. And in the meantime, enjoy this killer clip of Eric Burdon & War performing their signature song live in Germany from the classic European TV show, “The Beat Club.”