You are here: Home / Music / Jazz / Song Of The Day by Eric Berman – “St. James Infirmary” by King Oliver and his Orchestra 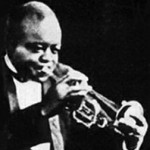 All of the greats in Jazz have someone to look up to and Louis Armstrong’s mentor was Joe “King” Oliver. Oliver was born in New Orleans and formed a band with trombonist Kid Ory who dubbed young Joe “King.” Oliver became known for his muted coronet playing and rose to fame in New Orleans before moving on to Chicago in the 1920s. It was there he formed an all-star band of then relatively unknown musicians featuring Johnny Dodds on clarinet, Baby Dodds on drums, Lil Hardin on piano and Louis Armstrong on second coronet. He then moved on to New York City where he made this recording in 1930 with Henry “Red” Allen joining Oliver on trumpet and Frankie Marvin on vocals. Oliver was a lousy business man who was offered a run at The Cotton Club which he turned down because he thought if he held out he would get more money for the gig. Duke Ellington took the job instead and rose to fame. Oliver’s playing suffered from gum disease and he died in 1938 a broke and destitute janitor after losing his life savings in The Great Depression.