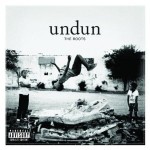 They are much more than just the house band for “Late Night With Jimmy Fallon” on TV every night. The Roots crew from Philadelphia was formed by vocalist Tariq “Black Thought” Trotter and drummer Ahmire “Questlove” Thompson in 1987. For over 25 years they’ve been providing their own brand of soul-infused jazz and hip-hop to a loving audience. But it wasn’t until they became the house band for Jimmy Fallon’s TV show that they gained in popularity and acceptance by a wider audience. This song is from their latest album, a concept record, called “Undun.” Even if you’re not a hip hop fan, tap into the lyrics to the chorus for some insight into their brilliance: “We’re all on a journey, down the hall of memories. Don’t worry ’bout what you ain’t got. Leave with a little bit of dignity. Never loved what I had. Always felt like I deserved more. But when I get to the other side, that’s when we settle up the score.”