You are here: Home / Music / Classic Rock / Song Of The Day by Eric Berman – “Summer’s Almost Over” by Loudon Wainwright III 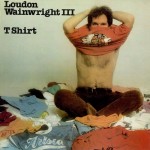 I remember we had a going away party for my daughter who was at the time embarking on her first year of college. What I’ve been told is that the child who leaves for college never really comes back home. What comes back in their place is a more self-assured facsimile of what left, with an all-important year of independence under their belt. Not only am I conflicted about her going away on her own, but it also brings about the feeling of ennui I get at the end of summer in general. That feeling is perfectly captured in this song by Loundon Wainwright III from his 1976 album called “T Shirt.” I remember that when this album came out, our country was in the throes of Bicentennial fever captured by the lead-off track from this album called “Bicentennial.” By the time the Bicentennial buzz wore off, it was time to go back to school and it was this song that always put my emotions into perspective.