You are here: Home / Music / Alternative / Song Of The Day – “Cosmic Convoy” by Todd Rundgren & Utopia 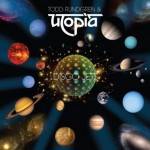 If it had come out when it was recorded, it would have been met with shrugs, or even worse, total disdain. Instead, except for those lucky few who could afford an expensive Japanese import box set, we’ve had to wait 36 years for it to finally get a legal release, and then only in the U.K. However, if you’re a fan of Todd Rundgren and Utopia, then it was totally worth the wait.

“Disco Jets” was recorded in 1976, directly after sessions for the album “Faithful.” The album found Todd Rundgren with his head firmly in the past, giving half the tune stack over to faithful covers of songs from 1966 including “Good Vibrations,” “Strawberry Fields Forever” and “Most Likely You Go Your Way (And I Go Mine), with the other half of the album comprised of new Rundgren originals including the now-classics “The Verb To Love,” “Love Of the Common Man” and “Cliché.”

“Disco Jets” was a total comment on the current pop culture of the day, including disco tunes, a cover of the “Star Trek” theme, a song called “Pet Rock,” outer space songs, even a song addressing America’s big 200th birthday Bicentennial (“Spirit Of ‘76”). Today’s Song Of The Day was Utopia’s comment on the whole “Convoy” craze brought on by the C.W. McCall’s 1976 #1 hit.

The all-instrumental album was quickly cut in one weekend with the Utopia lineup of Todd Rundgren, Roger Powell, John Siegler and Willie Wilcox. None of the members took the sessions too seriously and some of them came away from the proceedings a little embarrassed, but by listening you can tell that they all had a blast recording an album that at times is reminiscent in sound to “Wired” era Jeff Beck.

Siegler left Utopia after the sessions, to be replaced by Kasim Sultan. When the band resumed recording, work began on the album “Ra,” leaving Disco Jets in the can. It’s a shame too, because although the album is totally of its time, the classic Utopia sound today comes as a welcome breath of fresh air, circa 1976.