You are here: Home / Music / Big Band / Song Of The Day by Eric Berman – “Swinging On A Star” by Bing Crosby 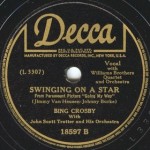 This Academy Award winner for Best Original Song was composed by Jimmy Van Heusen and Johnny Burke for the 1944 film “Going My Way” in which Bing Crosby plays a priest. The song’s genesis came out of a meeting at Crosby’s house between him and Van Heusen to discuss music for the film. Crosby son came into the room to complain about going to school the next day. Van Heusen replied that if he didn’t go to school, he may turn out to be a mule. The song grew from there. While Crosby’s smooth delivery makes this the definitive version of the song, it has been recorded by numerous artists including Burl Ives, Frank Sinatra, Rosemary Clooney, Tony Bennett, Shari Lewis and Little Eva. The backing vocals on Crosby’s version are supplied by The Williams Brothers Quartet including a young Andy Williams.