You are here: Home / Music / Classic Rock / Song Of The Day by Eric Berman – “Tales Of Brave Ulysses” by Cream 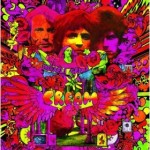 Cream were rising to the top and riding high with their Wheels Of Fire album when they took to the stage of The Smothers Brothers’ TV show in July of 1968 with this song from their previous album, “Disraeli Gears.” With proclamations of “Clapton is God” spray-painted all over the walls of England, Cream began to feel the pressures of having THE deity in their group. The song was inspired by Judy Collins’ recording of the Leonard Cohen song, “Suzanne,” and features Clapton’s first use of a wah-wah pedal on a record. In fact, it’s been said that it was THE first use of a wah-wah pedal on any rock record.