You are here: Home / Music / Alternative / Song Of the Day by Eric Berman – “Midnight City” by M83 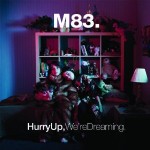 France’s M83 is so epically 1980s that even the band’s name references the decade. In actuality, M83 named themselves for a celestial galaxy called Messier 83 and the “band” really boils down to French musician Anthony Gonzalez and whomever he chooses to work with on a project. This song comes from their breakthrough 6th album, “Hurry Up, We’re Dreaming,” which was inspired by Gonzalez’s dreams and The Smashing Pumpkins’ “Mellon Collie and the Infinite Sadness.”