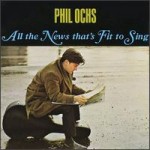 I am proud to say that one of my son’s all-time favorite records is Phil Ochs’ first album “All The News That’s Fit To Sing” from 1964. Sure, he heard it from me first after watching the excellent Phil Ochs documentary “There But For Fortune”, but in this day of quick cut video games and non-stop Comedy Central, it amazes me that a kid his age would be such a fan of the seemingly prehistoric form of music known as folk, as well as a serious folkie like Ochs. What amazes me more is that he doesn’t really like Dylan that much because he says, “Dylan can’t sing.” This is one of his favorite Ochs songs, which my daughter so astutely pointed out is a retelling of Edgar Allan Poe’s poem “The Bells.” Geez…my kids are so smart…smarter than me, in fact.