You are here: Home / Music / Alternative / Song Of The Day by Eric Berman – “The Descent” by Bob Mould 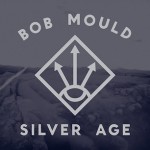 I was a huge fan of Husker Du and saw them many times during the 1980s. After the Du broke up, I saw Bob Mould acoustically on the “Workbook” tour and then again with his second power trio, Sugar. In my book, Mould could do (or is that “du”) no wrong…that is until I read his biography called “See A Little Light.” What an artistic ponce he turned out to be…second only to the other major artistic blowhard, Pete Townshend. I got real sick and tired of reading about the suffering artist and realized the guy was pretty much a bastard to those around him. When I read biographies of my favorite artists, I usually end up rediscovering their recordings in a big way, but after reading Mould’s book I wasn’t sure I’d ever want to listen to him again. So it was with much trepidation (and a recommendation from my buddy Glen) that I checked out Mould’s latest record “Silver Age.” A return to “Du-ville,” it’s not…but it is a good record that finds Mould reconnected with his fuzzed out rockin’ mojo. Now if I could just stop hearing it without the book tinting my rose colored glasses, I might really be able to get behind it.