You are here: Home / Music / Chillwave / Song Of The Day by Eric Berman – “Love (Can Make You Happy)” by Mercy 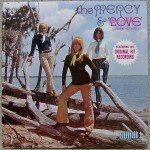 This slice of easy listening splendor hit the number two slot on the Billboard charts in 1969. At the time Mercy consisted of artists signed to the small Sundi Record label from Florida, and centered around member Jack Sigler, Jr. Once the song began to take off on the charts, Sundi rush-released an album with this song as the title track credited to “The Mercy” that featured none of the original members of the group. Such was the stuff of record companies in the 1960s. The record was quickly withdrawn due to litigation and Mercy was signed to Warner Bros. Records where another group centered around Jack Sigler, Jr. was formed. The Warner Bros. album managed a respectable #38 chart placing on the Billboard Album Charts. Another Sigler-led group still tours today and released an EP back in 2009. On a side note, I’ve been single-handedly trying to bring the expression “Mercy” back into popularity. I have been using it to show exasperation and surprise since the beginning of the summer, but it doesn’t seem to want to gain traction amongst my circle of influence…mercy…