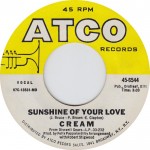 Today’s Jukebox classic was the biggest hit single by classic rock supergroup Cream. While some were spray painting the buildings of England with proclamations that Eric Clapton was God, the real star of Cream was bassist Jack Bruce. Not only was Bruce the songwriter behind some of the group’s biggest hits, but it was his voice that defined the group’s sound. Ginger Baker, of course, laid down the backbeat that drove the machine to greatness, and as for Clapton, he’s been literally coasting on the stellar guitar work he laid down with this group for over 40 years ago.

They were, indeed, one of the early “supergroups” with very high pedigree. Clapton had played with John Mayall’s Bluesbreakers, The Yardbirds and had backed blues greats like Sonny Boy Williamson and Champion Jack Dupree. Baker played with Jazz artist Acker Bilk (of “Stranger On The Shore” fame), Alexis Korner’s Blues Incorporated and the Graham Bond Organisation. Bruce had played with Baker in Korner’s Blues Incorporated and The Graham Bond Organisation, with Clapton in The Bluesbreakers and Powerhouse (that also included singer Paul Jones and Steve Winwood), and briefly with Manfred Mann. And for once, this supergroup was much better than the sum of its parts, especially since Bruce and Baker didn’t get along at all.

That said, Cream never made a solid studio album, and even so, the band’s studio recordings are far more preferable than their live workouts that featured endless jamming extended to maddening proportions. Even though albums like Disraeli Gears, Fresh Cream and the half studio-half live Wheels Of Fire are considered classics today, they really are patchy affairs, each featuring a clutch of classic singles surrounded by throwaways.

Today’s Song Of The Day was the first single release from Cream’s 1967 album Disraeli Gears. “Sunshine Of Your Love” was written by Jack Bruce and Eric Clapton with lyrics by beat poet Pete Brown who also wrote the lyrics to the Cream hits “I Feel Free” and “White Room.” The classic bass line riff that runs through the entire song came to Jack Bruce after he and Clapton attended a Jimi Hendrix concert. The song was regularly covered in concert by Jimi Hendrix, who probably didn’t even know he inspired its creation.

The record almost didn’t get a single release because label chief Ahmet Ertegun thought that it was “psychedelic hogwash.” It was only after Booker T. Jones (of Booker T. and the MGs) championed the song that Ertegun green-lighted a single release. When the single was first released before Disraeli Gears came out, it only climbed to the #36 position on the pop charts. The single was re-released in 1968 after the album came out and ultimately rose to the #5 position on the pop charts becoming Cream’s biggest hit single. Over the years, the songs has been covered by everyone from Ella Fitzgerald and The 5th Dimension, to Santana and Frank Zappa.

The song was inspired by a type of flower that Jack Bruce ordered from the florist for his girlfriend. When the delivery man arrived, Bruce and Brown asked the florist about some of the flowers that came in the bouquet and were told that the flower in question was a type of iris called a Bearded Rainbow, hence the song title. Nevertheless, it was the late 1960s, and today the title is still pretty much meaningless.