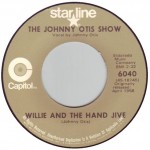 Otis scored 15 Top 10 R&B hits between 1950 and 1952, including his #1 cover of the jazz standard “Harlem Nocturne.”  He was a keen talent scout who opened up his own club in L.A., the Barrelhouse, and discovered many R&B and jazz greats.

He discovered Etta James when she was only 13 years old and produced and co-wrote her first hit single “Wallflower (Roll With Me Henry).” He also discovered Big Mama Thornton singing while cleaning hotel rooms. He co-wrote, produced and played on her seminal recording of “Hound Dog” in 1953, several years before Elvis Presley brought the song to the charts; however Otis’ songwriting credit was removed from Elvis’ recording by Jerry Lieber and Mike Stoller. He also wrote “Every Beat of My Heart” which was a hit for both The Royals in 1952 and Gladys Knight & The Pips in 1961, and played on and produced Johnny Ace’s number one hit “Pledging My Love” and The Fiestas’ classic hit “So Fine.”

Today’s Song Of The Day was a 1958 release that climbed all the way to #9 on the Pop charts and #1 R&B featuring an infectious Bo Diddley beat with terrific guitar work by Jimmy Nolen. The song is about a dance featuring hand movements called “The Hand Jive.”

Eric Clapton had a #26 chart hit with the song in 1974 from his 461 Ocean Boulevard album. It was also covered by Johnny Rivers in 1973, The Strangeloves on their 1965 album I Want Candy, Cliff Richard in 1960, The Grateful Dead (in 1980s concerts), New Riders Of The Purple Sage, The Flying Burrito Brothers, Levon Helm and George Thorogood, who also had a minor chart hit with the song in 1985.

The flip is one in a long line of “Willie” follow ups; this one was to capitalize on the cha cha dance craze of the 1950s. During the 1960s, Otis ran for the California State Assembly and lost. He then became chief of staff for Democratic Congressman Mervyn M. Dymally. He was inducted into the Rock And Roll Hall Of Fame in 1994 and was also the father of soul star Shuggie Otis. Johnny Otis died of natural causes on January 17, 2012.