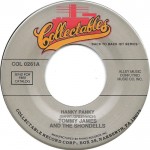 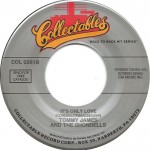 Today’s song was written by Jeff Barry and Ellie Greenwich under the name The Raindrops, in twenty minutes as a quickie B-side to the 1963 single “That Boy John.” Jeff Barry: “As far as I was concerned it was a terrible song. In my mind it wasn’t written to be a song, just a B-side.”

Tommy Jackson sneaked into a club at the age of 13 and heard a local group perform “Hanky Panky,”and after seeing its effect on the crowd, decided that he also wanted to record the song. Jackson and his group The Shondells recorded the song at their local radio station in Niles, Michigan. It was then released on the tiny Snap label and got local airplay before fading into obscurity.  Meanwhile, the Shondells went their separate ways after graduating from high school.

Two years later, Bob Mack, a Pittsburgh promoter started to play the single at dance parties and it began to get local radio play and gain in popularity. Demand for the record began to take off and bootleggers got into the game making up to 80,000 illicit copies of the record to meet the demand. Pittsburgh DJ “Mad Mike” Metro contacted Tommy and asked him if he would like to come perform the song for fans, however he no longer had a band. He was matched with a local band called The Raconteurs consisting of Joe Kessler (guitar), Ron Rosman (keyboards), George Magura (saxophone), Mike Vale (bass), and Vinnie Pietropaoli (drums), and they became The Shondells, and young Tommy Jackson changed his name to Tommy James.

Record companies like Atlantic, Columbia, Epic and Kama Sutra lined up to sign the group, but the small independent Roulette label ended up signing them. Roulette was owned by Morris Levy who had reported ties to the mob.

Tommy James: “One by one all the record companies started calling up and saying, ‘Look, we gotta pass.’ I said, ‘What? What are you talking about?’ ‘Sorry, we take back our offer. We can’t…’ There was about six of them in a row. And so we didn’t know what in the world was going on. And finally Jerry Wexler over at Atlantic leveled with us and said, Look, Morris Levy and Roulette called up all the other record companies and said, ‘This is my freakin’ record.’ (laughs) And scared ’em all away – even the big corporate labels. And so that should have been the dead giveaway right there. So we were apparently gonna be on Roulette Records.”

The single hit the number one position on the charts in 1966. The flip side of this reissue single was the title track to Tommy James & The Shondells’ 1966 album It’s Only Love, written by Morris Levy, Ritchie Cordell, and Sal Trimachi. The song reached number 31 on the Billboard pop singles charts in 1966.

Tommy James and the Shondells became one of the most commercially successful singles groups of the 1960s, selling millions of record and placing bubblegum classics like “I Think We’re Alone Now,” “Mony, Mony,” “Crimson And Clover,” “Sweet Cherry Wine” and “Crystal Blue Persuasion” onto the upper echelon of the charts.

However, things came to a dramatic end in March of 1970, when the group played their last concert together in Birmingham, Alabama. As James was leaving the stage, he collapsed and was initially pronounced dead after suffering a bad reaction to drugs. The band continued to tour without James for a time under the name Hog Heaven, while he retired to the country to recuperate.

While recuperating, James wrote and produced the million-selling single “Tighter, Tighter” for the group Alive And Kickin’ which reached #7 on the Billboard singles chart, and followed it with his biggest solo hit, “Draggin’ The Line.”

NOTE: Why, oh why isn’t the studio version of “Hanky Panky” available on YouTube? You can get most all of The Shondells other classic singles in all their original glory, but for “Hanky Panky” we can only get recent live versions. That said, Tommy James still has IT!!  Here’s a version of “Crimson And Clover” that goes into “Hanky Panky.” Sit back and rewind to the sounds of Tommy James!