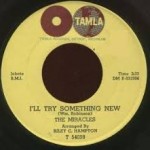 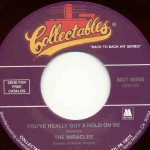 Before The Miracles, before Berry Gordy and before Motown, a talented singer and aspiring songwriter named William Robinson formed a group called The Matadors. The Matadors consisted of Bobby Rogers, Ronnie White, Warren Moore and Claudette Rogers.

They met a hungry promoter named Berry Gordy who had his first taste of success by writing the Jackie Wilson hit “Reet Petite.” The Matadors auditioned for Gordy who liked the group, especially their lead singer. When Williams told Gordy that he could write songs, the two sat down and wrote an answer record to The Silhouettes’ 1958 hit “Get A Job,” and called it “Got A Job.”

Gordy thought the name, The Matadors, was far to masculine for a group that featured a vocalist like William Robinson and also a female vocalist, so he changed their name to The Miracles. Gordy negotiated a release of the record on the independent End record label in 1958 and it became a minor hit.

With the money earned from the hit record, Gordy went on to found the Motown record label making Robinson the vice-president…so you may say that both Gordy and Smokey Robinson (as he became known) “Got A Job” with the release of the record of the same name.

Songs don’t come any more romantic than the top side of today’s double A-sided single! The first thing that grabs you is the angelic, echo-laden production sound of the record with its elaborate and plush bed of strings. If that doesn’t automatically get your attention, then Robinson’s gossamer vocals are sure to woo even the most hardened heart. (Note: For the ultimate in greatness, check out his soulful vocals during this record’s fade.)

The song was one of The Miracles early singles from 1962 and was also the title track to their third album. Upon its release, it climbed to the #11 position on the R&B charts and settled at #39 on the pop list.  In 1969, the song was released as a single by The Supremes and The Temptations together that climbed to #25 on the pop charts and #8 R&B. It was also covered by disco group A Taste Of Honey in 1982.

The flip of today’s single was a much bigger hit for The Miracles topping the R&B charts and climbing all the way to #8 on the pop list while selling a million copies. “You’ve Really Got A Hold On Me” is deservedly in the Grammy Hall Of Fame and also holds the distinction of being covered by The Beatles on their second album.

The song was written by Smokey Robinson for his wife (and group member) Claudette after hearing Sam Cooke’s “A Change Is Gonna Come” on the radio while on a business trip in New York City. When originally released, it was relegated to the B-side of the song “Happy Landing,” however DJs flipped the record and liked it much better. Both songs appeared on The Miracles second album The Fabulous Miracles released in 1963.

The Beatles first heard the song after finding an imported copy from the U.S. and it quickly became a staple of their early live repertoire. It was recorded for their second album With The Beatles (in the U.K.) and The Beatles’ Second Album (in the U.S.) featuring an indelible lead vocal by John Lennon.

The Beatles re-recorded the song after EMI acquired their first four track recording equipment; however that version was deemed no better than the original and remains unreleased to this day. They also recorded it four times for broadcast on BBC radio. The song can also be heard in the 1970 Let It Be and it was also featured in a live version from Stockholm, Sweden in October 1963 on the Anthology 1 album.

The Beatles covered several Motown songs early in their career, including “Money (That’s What I Want)” and “Please Mr. Postman,” because Berry Gordy gave the group reduced rates as an enticement since they were such a big recording act. The song has also been covered by a myriad of artists including The Supremes, The Temptations, The Zombies, The Jackson 5, Mickey Gilley (#2 Country Hit), Phil Collins, Mike + The Mechanics and She & Him.