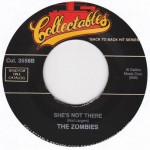 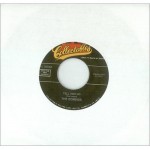 The Zombies’ fingerprints can be felt all over the music of The Byrds, The Doors, Crowded House and Tom Petty and the Heartbreakers.  Elvis was a big fan and they were hugely influenced by The Beatles, as well as being an influence on The Beatles. John Lennon wanted to produce them, and the sound of today’s double A-sided jukebox single with their debut hit “She’s Not There” on the A-side and the ultra-Lennonesque “Tell Her No” on the flip is, in my estimation, a perfect single.

Add to that, not one, but two inspired songwriters in Chris White and Rod Argent, whose compositional abilities made perfectly crafted ‘60s pop records, high on melody and infused with great harmonies.  It was all held together by Argent’s jazz-infused piano and organ playing, the tasty and tuneful guitar work of Paul Atkinson, and the air-tight rhythm section of White on bass and Hugh Grundy on drums, providing a danceable and infectious back beat.

Yet their impact was far greater in the U.S. than at home where their very first single “She’s Not There” peaked at #12 on the British charts, but made it all the way to #2 on these shores. Its follow up, “Tell Her No,” climbed to #6 in the U.S., but didn’t even make it into the UK top 40.

“She’s Not There” was the group’s debut single which was recorded in one take after the band won studio time in a talent contest. The song makes its impact right from the onset with its folk infused introduction which was rare for early 1960s rock recordings. In the early 1970s, the song was re-recorded by Zombies vocalist Colin Bluestone under the name Neil McArthur. This version climbed to the #34 position of the UK charts, and it also charted again in 1977 by Santana from their Moonflower album. “Tell Her No,” on the flip, was later recorded by Juice Newton in 1983 who brought the song into the pop top thirty.

After a string of great single releases here and abroad including “What More Can I Do,” “I Love You,” “I Can’t Make Up Your Mind,” “Summertime,” “Goin’ Out Of My Head” and “Is This The Dream” that didn’t seem to ignite the imagination of the public, The Zombies released their final magnum opus album, Odessey and Oracle in 1968 and then called it quits.

But timing is everything…so it is somewhat ironic that the group’s biggest worldwide hit, “Time Of The Season,” happened after they disbanded.  Odessey and Oracle wouldn’t have even received a release on these shores had it not been for Al Kooper who worked for the group’s U.S. label and convinced them that the album was worth a proper release. Even though the group was no longer together, the album’s release was accompanied by the “Time Of The Season” single which went on to become their biggest hit all over the world.

After the breakup, Rod Argent went on to form the group Argent with Chris White (who wrote songs for the group, but did not perform.)  They scored a hit with “Hold Your Head Up” in 1972, and had the distinction of having both KISS and Christian rock group Petra cover their song, “God Gave Rock ‘n’ Roll To You.”

Colin Blunstone recorded many solo records, some with the help of his former band mates; he released three albums on Elton John’s Rocket Record Company label during the 1970s, and recorded vocals for The Alan Parsons Project albums Eye In The Sky and Ammonia Avenue. Throughout the years, Argent and Blunstone have toured many times together as a duo, or under the Zombies name performing hits from all phases of their intertwined careers. The definitive Zombies collection available today is Zombie Heaven, a four CD box set released by Ace Records in the U.K.