You are here: Home / Music / Song Of The Day by Eric Berman – “Thin Line Between Love And Hate” by The Persuaders 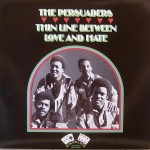 Although they were best known for this 1971 million seller, The Persuaders also recorded the original versions of classics like “The Best Thing That Ever Happened To Me” (later covered and brought to the charts by Gladys Knight & The Pips) and “Some Guys Have All The Luck” (covered and charted by Rod Stewart). In fact, The Pretenders remade a super soulful version of “Thin Line” on their debut album in 1980. The Persuaders original lineup included Douglas “Smokey” Scott, James Holland, Willie Holland, Thomas Hill Sr. and Charles Stoghill and they formed in New York in 1969. They continued to score hits through 1973 and record through 2006 with an ever-changing lineup. Here they are in the early 1970s performing the song on “Soul Train.”