You are here: Home / Music / Jazz / Song Of The Day by Eric Berman – “Work Song” by Cannonball Adderly Quintet 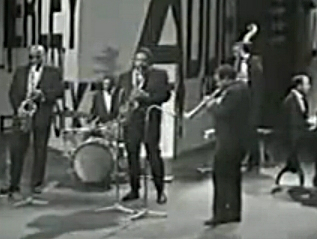 The “Cannonball” in Julian Edwin Adderly’s name stood for “cannibal” and was given to him by his high school friends due to his robust eating habits. Adderly was one of the most talented and in-demand saxophone players of the ’50s and ’60s. He participated in the recording of two of the most heralded records in Jazz, “Kind Of Blue” and “Milestones” by Miles Davis before striking out on his own with his brother Nat on coronet. This recording of “Work Song,” written by brother Nat, features Joe Zawinal on piano, Nat Adderly on coronet, Cannonball on alto sax, Sam Jones on bass and Louis Hayes on drums. It was recorded live at Auditorio RSI, Lugano, Switzerland on March 24, 1963.