You are here: Home / Music / Classic Rock / Song Of The Day by Eric Berman – “Uptown” by The Crystals 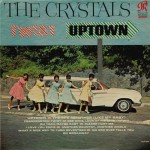 They had a string of hits in the early ‘60s written and produced by the best of what The Brill Building had to offer. There was “Uptown,” written by Barry Mann & Cynthia Weil, the somewhat ludicrous “He Hit Me (And It Felt Like A Kiss), (Carole King and Gerry Goffin), “He’s A Rebel” (Gene Pitney), “Da Doo Ron Ron” and “And Then He Kissed Me” (Jeff Barry and Ellie Greenwich), to name but a few. Many of the aforementioned classics were produced by Phil Spector utilizing the Wrecking Crew session musicians on his over the top “Wall Of Sound” production. The seminal records they cut sounded best when emanating out of a mono car radio (preferably of early ‘60s vintage). But who were The Crystals…and were they the same group on all of their records? The original Crystals consisted of school friends Barbara Alston, Mary Thomas, Dolores “Dee Dee” Kenniebrew, Myrna Girard, Patricia “Patsy” Wright and Dolores “Lala” Brooks (who replaced the pregnant Girard after their first few hits). This was the group that gave us the hit “Uptown.” Soon thereafter, Spector began using whoever was available when he was ready to record resulting in Darlene Love and The Blossoms billed as The Crystals on several of their hits. A slightly different version of the original group was soon back on their records until jealousy began to bear its ugly head between them and Spector’s other main protégé’s The Ronettes. Things got so bad, that The Crystals finally dissolved and Spector used The Ronettes (billed as The Crystals) on several tracks of the album “The Crystals Sing Their Greatest Hits.” Such was the music business of the early sixties! No matter who was actually in the studio, I think it’s safe to say that The Crystals made a clutch of world-class classics that have stood the test of time.