You are here: Home / Music / Alternative / Song Of The Day – “Who Wants Ice Cream” by Ravi Coltrane 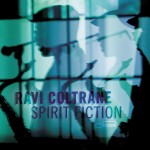 In 1965, while John Coltrane was giving birth to his masterpiece “A Love Supreme,” his wife Alice was giving birth to their son Ravi. Sure, it’s in the blood…and it can’t be easy being a Jazz saxophonist whose father was a legend, but throughout the years, Ravi Coltrane has steadily carved out his own space in the world of Jazz. And if you don’t already think he’s arrived, his latest album “Spirit Fiction” should seal the deal for anyone with adventurous ears. Coltrane sessioned during his formative years with the likes of his mentor, Steve Coleman, Branford Marsalis, McCoy Tyner, Kenny Barron, Carlos Santana, Pharoah Sanders, Herbie Hancock, Stanley Clarke and many others before forming his own solid support team of Ralph Alessi on trumpet, Geri Allen on piano, James Genus on bass and Eric Harland on drums. Together, this group has recorded several albums and have fashioned one of the best Jazz albums this year lacking pretension while highlighting dynamic chops to spare.