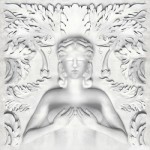 Kanye West is a mutha-fucken’ “G” – that’s not “G” as in Gangsta, by the way, that’s “G” as in GENIUS. Think what you may about Kanye’s antics, and he’s always full of surprises, but you can’t touch him when it comes to creating some of the greatest Hip Hop records…ever! Truth be told, the point Kanye was making at the Grammy Awards when he interrupted Taylor Swift was a valid one. Beyonce’s “Single Ladies” was the best video of that particular year, certainly better than the ones that were receiving the awards, and with the passage of time the video has become one of the most iconic music videos of all time. It was the bone-headed way he chose to handle himself that night that caused him problems. The “GOOD” of GOOD Music stands for “Getting Out Our Dreams” and it is also Kanye’s record label. The new album called “Cruel Summer” features many of the artists from the label’s roster including John Legend, Kid Cudi, Common, Pusha T, plus some of his other high-profile friends. This track features Kanye, Jay-Z and Big Sean.