You are here: Home / Music / Indie / Song Of The Day – “Eyeoneye” by Andrew Bird 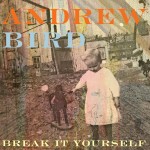 One of our favorite sons out here in Chicagoland, Andrew Bird just released his most ear-pleasing record yesterday called “Break It Yourself.” A master whistler and violinist, Bird has cruised the most non-traditional paths to stardom beginning with his instruments of choice and an amalgam of musical influences including swing, classical, jazz, zydeco and Irish folk tunes. After a stint with the neo-swing band Squirrel Nut Zippers, Bird launched his own Bowl Of Fire band but soon grew restless and struck out as a solo artist creating tape loops of himself on the fly and performing along with the loops. Whether performing solo or with a band, Bird is a must-see in concert.