You are here: Home / Music / Classic Rock / Song Of The Day – “Guitar Man” by Jerry Reed 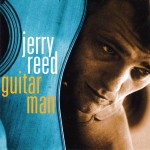 It was difficult to take Jerry Reed seriously, and one suspects it was all by his own design. Reed’s larger than life persona was that of a goofy country hick who sure could tell a tall tale, and numerous TV appearances on The Glen Campbell Goodtime Hour and The Johnny Cash Show, novelty story-song records like “Lord, Mr. Ford” and “When You’re Hot, You’re Hot,” and numerous movie appearances with the likes of Burt Reynolds and Adam Sandler cemented this notion in the psyche of the American music loving public. But Jerry Reed was a C.G.P.

The C.G.P., or Certified Guitar Player, was a title originated by the first C.G.P., Chet Atkins, and was only bestowed upon folks who not only totally mastered the guitar, but also contributed to the legacy of the instrument. Jerry Reed was one of only five pickers awarded the C.G.P. title. The other four were Chet Atkins, Steve Wariner, John Knowles and Tommy Emmanuel. But more than being a C.G.P., Reed was a showman with a flashy guitar style.

Reed possessed a singular staccato finger picking style that was often imitated, but hard to duplicate. When Elvis Presley chose to cover today’s Song Of The Day in 1967, he summoned Reed to the studio for the session because Presley was dissatisfied with the sound his band was getting on the track. As soon as Reed arrived and began playing, Presley’s face lit up and the session continued, garnering Presley and Reed a hit with the song.

Here’s an account of the circumstances of that session in Reed’s own words: “See, I had my own tuning, and they were trying to record “Guitar Man,” and they couldn’t make it feel like my record. And I forget if it was Pete Drake or Charlie McCoy or Chip Young – one of those musicians said, ‘Well, these guitar players in here are playing with straight picks, and, you know, Reed plays with his fingers. So they called me, and I went down, and I hooked up that electric gut string, tuned the B-string up a whole tone, and I toned the low E-string down a whole tone, so I could bar straight across, and as soon as we hit the intro, you could see Elvis’ eyes light up he knew we had it.”

After Presley recorded another Reed song, “U.S. Male,” Reed wrote and recorded a tribute to Elvis called “Tupelo Mississippi Flash,” which resulted in his first Top 20 hit. But I’m getting ahead of myself.

Reed got his start after Atlanta music publisher Bill Lowery helped him secure a songwriting and recording contract with Capitol Records when he was 16 years old.  And while he didn’t have any hits of his own during this period, his songs were covered by Brenda Lee and Gene Vincent, who scored a 1958 hit with his song ”Crazy Legs.”

Reed relocated to Nashville in 1961 to pursue his songwriting career and he garnered some success when Porter Wagoner scored a 1962 No. 1 country hit with his song “Misery Loves Company.”  It was around this time that Reed released his own singles “Goodnight Irene” and “Hully Gully Guitar” which brought him to the attention of musician and record label chief of RCA Nashville, Chet Atkins who began producing his sessions including the 1967 session that produced “Guitar Man.”

By the late ‘70s, Reed had gained recognition not only for a successful solo career but also as an ace session player. But this was never enough for Reed and Hollywood was beckoning, so he answered the call and became, you guessed it, a movie star. After appearing in the 1976 film Gator, Reed struck box office gold with Burt Reynolds in the 1977 film Smokey And The Bandit. The film also spawned another #1 hit for Reed with “East Bound And Down.”

Reed appeared as Reynolds’ sidekick, Cledus Snow in three Smokey And The Bandit movies as well as garnering parts in other films of dubious distinction including High-Ballin’ (1978), Stroker Ace (1983), What Comes Around (1985, of which he also directed), Bat*21 (1988) and The Waterboy  (1998) which also starred Adam Sandler. While none of these movies helped his credibility as a recording artist, he did score several novelty hits and also made a boat-load of money.

Reed died in Nashville, Tennessee, on September 1, 2008, of complications from emphysema.