You are here: Home / Music / Classic Rock / Song Of The Day – “Little Bitty Pretty One” by Thurston Harris 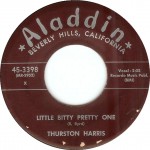 It starts off so simple. Just a bunch of guys humming in harmony over an infectious backbeat, and that was the only hook “Little Bitty Pretty One” ever needed to be propelled into the pop charts and to be forever known as a golden Rock ‘n’ Roll classic. And if you’re going to be a one-hit wonder, you might as well be known for a song as great as this one!

Thurston Harris came up through the early R&B scene of Los Angeles singing with groups like The Lamplighters, The Tenderfoots and The Sharps. It was with backing from The Sharps that Harris recorded his signature hit “Little Bitty Pretty One.” (The Sharps would go on to score a huge hit with “Papa-Oom-Mow-Mow” under the name The Rivingtons after Harris left their ranks.)

Today’s Song Of The Day was written by Bobby Day who also wrote The Dave Clark Five hit “Over And Over,” and is probably best remembered for his hit recording of “Rockin’ Robin” which was later covered by Michael Jackson.  When the “Little Bitty Pretty One” single was released on the Aladdin record label in 1957, it vaulted all the way up to #6 on the Billboard singles chart.

The song has been covered by the likes of Frankie Avalon, Frankie Lymon, Clyde McPhatter, The Dave Clark Five, The Jackson Five, Cliff Richard, Lindisfarne and Huey Lewis & The News. It has also appeared in the films Matilda, Christine, Corinna Corinna, The Princess Diaries and Indiana Jones and the Kingdom of the Crystal Skull, and in the British TV show Lipstick On Your Collar. It has also turned up in TV commercials for Lipton Teas, Heinz soups and Bird’s Eye frozen vegetables.

While the song has remained popular over the years, the same can’t be said for Thurston Harris. He would only manage to grace the pop charts one more time with his 1958 single, “Do What You Did” that made it to #20 on the R&B charts.

After recording records for Dot, Cub, Imperial, Reprise and United Artists, Harris lived the rest of his life in obscurity driving a bus for the city of Los Angeles. Meanwhile, unbeknownst to him, his records remained popular in Europe where tracks like “Do What You Did,” “Hey Baba Leba” and “In the Bottom of My Heart” dance floor hits in Northern Soul circles.

Harris died of heart failure and acute alcoholism on April 14, 1990.