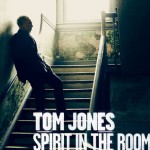 Tom Jones just released his 40th album this week called Spirit In The Room. It was released last May in England and has finally gained a release stateside. It is also the second “mortality” album he’s released in a row.

The “mortality album” occurs when a rapidly aging heritage artist is matched with a hip (younger) producer, who in this case is Ethan Johns. (Johns was also at the helm for his last “mortality album” Praise And Blame.) The producer acts as a mentor to the artist and curates the record by choosing the songs that not only will give the artist credibility with the young in-tune hipsters, but will also connect with the original fan base who are also getting older and can totally relate to, you guessed it, a “mortality” album.

Johnny Cash practically invented the genre with the series of late career American Recordings records he made with producer/Svengali Rick Rubin. With each release, his voice became weaker and weaker, while he just became cooler and cooler. Glen Campbell has released several “mortality” records also under the tutelage of producers Julian Raymond and Howard Willing. Both records have given him the kind of credibility he can happily retire on. In the case of Tom Jones, he still has all of his faculties, and still has one of the most thrilling and powerful voices ever.

Crucially, a “mortality” album must have a list of songs by “hipster approved” songwriters like Leonard Cohen, whose “Tower Of Song” kicks off this album, Tom Waits who provides the title track from his latest album “Bad As Me,” Bob Dylan’s Modern Times track “When The Deal Goes Down” (which is arranged here like a Tom Waits recording), the Richard and Linda Thompson classic “Dimming Of The Day,” Paul McCartney’s “(I Want To) Come Home” which he wrote for the 2009 film Everybody’s Fine and Today’s Song Of The Day “Just Dropped In.”

“Just Dropped In” is also known as “Just Dropped In (To See What Condition My Condition Is In).” It was written by the late, great Mickey Newbury and it put Kenny Rogers on the map by providing his band The First Edition with their biggest hit in the late 1960s. It is also, by far the standout track on this album. Jones makes this classic his own, in spite of Ethan Johns doing his best Mark Ribot imitation on the guitar on an arrangement that sounds like it’s fallen off of a Tom Waits album.

I don’t think the whole “mortality” route is the way to go for Tom Jones. It’s too austere, and he’s much too vital to be giving us an end of career/end of life album. I also don’t think it’s going to get him the late career renaissance he’s probably looking for either. But if you are a fan of Tom Jones, there are several highlights to be found on Spirit In The Room, like today’s Song Of The Day “Just Dropped In,” the Blind Willie Johnson classic “Soul Of A Man” and the self-penned Traveling Shoes, with only a few real clinkers in the bunch. And, most importantly, they are all sung with passion and soul to burn.