You are here: Home / Music / Classic Rock / Song Of The Day– “Lumpy Gravy” by The Persuasions 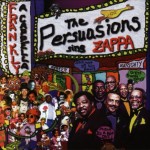 From Gospel to The Grateful Dead, The Persuasions are an a capella group whose musical tastes know no boundaries.

The group’s five original members, Jerry Lawson, Jesse “Sweet Joe” Russell, Jayotis Washington, Herbert “Toubo” Rhoad, and bass vocalist Jimmy “Bro” Hayes began singing on the street corners of Bedford Stuyvesant, Brooklyn during the early 1960s. Jerry Lawson was their arranger, lead singer and producer for most of their career until his departure in 2003.

Their big break came in 1968, when Stan Krause, who owned Stan’s Square Record Store in New Jersey, played a concert recording of theirs over the telephone to his friend, Frank Zappa. Zappa, being a doo wop aficionado, was intrigued enough to fly them out to LA where he produced their 1969 debut album A Capella for his Bizarre/Straight record label.

By way of thanks for producing their debut record, The Persuasions recorded the album Frankly A Capella in 2000. On the album, Zappa classics from early and late in his career get the Persuasions treatment including a capella versions of “Electric Aunt Jemimah,” “The Meek Shall Inherit Nothing,” “Cheap Thrills,” “Love Of My Life,” “You Are What You Is,” “Hotplate Heaven At The Green Hotel,” and “Anyway The Wind Blows.” The album also includes cameos by Zappa sidemen Bruce Fowler, Bobby Martin and Mike Keneally. Today’s Song Of The Day is a cover of “Lumpy Gravy” which originally appeared as the title track for Frank Zappa’s 1968 album Lumpy Gravy.

The group followed their Zappa tribute album with one for The Grateful Dead called Might As Well: The Persuasions Sing Grateful Dead where they took on the Dead classics “Bertha,” “Here Comes Sunshine,” “Must Have Been The Roses,” “Ship Of Fools,” “Greatest Story Ever Told” and several others.

They’ve also recorded tribute albums to The Beatles featuring versions of “Eight Days A Week,” “Love Me Do,” “Ob-La-Di, Ob-La-Da,” “Don’t Let Me Down” and “Come Together,” and U2 including “Even Better Than The Real Thing,” “One,” “Angel Of Harlem,” “I Still Haven’t Found What I’m Looking For” and “Pride (In The Name Of Love).”

The group’s baritone, Herbert “Toubo” Rhoad died in 1988 while on tour, and Jerry Lawson left their ranks in 2004; however the band still continues to perform today. The Persuasions were a huge influence on the modern vocal groups, Take 6, The Nylons and Boyz II Men, and if ever a group deserves to be in heavily flawed Rock ‘N’ Roll Hall Of Fame, it’s The Persuasions.