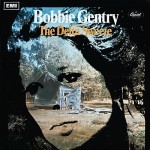 Timing certainly played a part in rendering The Delta Sweete an obscure gem. The album was released as the follow up to Gentry’s Grammy-winning, 1967 chart-topping single ”Ode To Billy Joe” and the album of the same name. While “Ode” established Gentry with the American public, the song pretty much overshadowed the album it was culled from, as well as everything else that came after it. As a result, Sweete didn’t’ register at all with the American public barely denting the album charts at #132, with its only single, “Louisiana Man” climbing as high as #100.

Today’s Song Of The Day kicks off the album with all the down-home swampiness that fans have come to know and love from Gentry. Her sultry delivery sits atop a pulsating horn arrangement, while the lyrics take us on a tour of the Mississippi Delta under the guise of a talent show.

The rambunctious sound of “Reunion” captures the vibe of a family gathered around the dinner table while its structure stems from the jump rope playground games of Gentry’s youth. The album benefits from the inventive arrangements of Jimmie Haskell and Shorty Rogers, while Gentry is heard playing guitar, banjo, bass and vibes throughout.

Several gorgeous ballads highlight Gentry’s husky, emotive delivery including “Morning Glory” a beautiful track that comes on like a gentle summer breeze, “Jessye ‘Lisabeth” with a classical chamber pop arrangement and “Courtyard” which brings the album to a delicate close.

Amongst Sweete’s originals are several well-chosen covers that further the down-home vibe of the record, including versions of Mose Allison’s “Parchman Farm,” John D. Loudermilk’s “Tobacco Road,” and Doug Kershaw’s “Louisiana Man.” There’s also a cover of Luther Dixon’s “Big Boss Man” which was originally made famous by Jimmy Reed in 1961. There have literally been hundreds of recordings of this standard most notably by Elvis Presley in 1967 and The Grateful Dead in 1971, and Gentry’s reading stands tall among them.

It’s an album that fell through the cracks instead of rightfully gaining stature as a classic, and Bobbie Gentry has become one of the most underrated and largely forgotten songwriters of the late 1960s. She would go on to release five more albums before removing herself from the spotlight entirely after years of performing in Vegas and a failed TV career. She retired in 1978 at the age of 36, never to be professionally heard from again. Today, her career is ripe for rediscovery. Come back Bobbie, the world is still waiting…