You are here: Home / Music / Children's / Song Of the Day – “The Alley Cat” by Bent Fabric 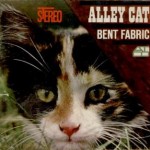 Today there’s Psy’s “Gangnam Style,” wreaking havoc across dance floors all over the world. In the 1990s, there was “The Macarena.” In the 1980s, country line dancing and “The Lambada” had their day in the sun, and the ‘70s gave us “The Electric Slide.” But in the early 1960s, there was only one communal synchronized dance that kids and adults alike shared in, making it a staple at weddings, proms and Bar Mitzvahs.

In actuality, “The Alley Cat” began as a 1961 hit for Bent Fabricius-Bjerre in Denmark under the title “Omkring et Flygel” (“Under The Table”). The song was picked up for U.S. distribution by Neshui and Ahmet Ehrtegun and released on their Atco label in 1962, where it became a million-selling top-ten hit.  The song also went on to win a Grammy Award for, get this, Best Rock and Roll Record of 1962!