You are here: Home / Music / Broadway / Song Of The Day – “Willkommen” by Joel Grey from the film “Cabaret” 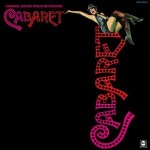 A funny thing happened to the Broadway Musical Cabaret during its adaptation to the big screen. It lost ten out of its original fifteen songs. Many of the original Broadway songs were in the play to express the emotions of the characters and move the plot line forward, something that the medium of film was able to accomplish by using visuals. As a result, Bob Fosse only retained the songs “Wilkommen,” “Two Ladies,” “Tomorrow Belongs to Me,” “If You Could See Her,” and “Cabaret” for the film. The rest were dumped, as were characters and elements of the original plot.

Cabaret opened on Broadway in 1966 starring Jill Haworth, Bert Convy, Lotte Lenya, Jack Gilford and  Joel Grey. Grey would reprise his role as the Emcee for the film. The show was directed by Harold Prince and choreographed by Ron Field and had a successful run on Broadway. The musical was based on the 1951 play I Am Camera which was written by John Van Druten, and Druten’s play was adapted from the 1939 short novel Goodbye to Berlin by Christopher Isherwood.

The 1972 film starred Liza Minnelli, Michael York and Joel Grey and was directed by Bob Fosse with music by John Kander and lyrics by Fred Ebb. Kander and Ebb added new material to better fit the film’s plot including, “Mein Herr,” “Money Money” and “Maybe This Time.” Minnelli had been performing “Maybe This Time” for many years already, since it was not originally written for the film. As a result, it was not eligible for an Academy Award nomination.

Today’s Song Of The Day opens the musical with a solitary drum roll rather than an overture. The song introduces the show girls of the Kit Kat Klub, “Each and every one, a wirgin!”, where much of the action takes place. Most of the action that takes place in the club reflects what was going on outside in the real world of Nazi Germany. The song and film clip are classic Joel Grey in his signature role, playing up the kitsch factor in tantalizing fashion for the cameras. You’d be hard pressed to find another actor as “on” as Grey in this role. Indeed, the soundtrack outsold the Broadway recording spurred on by the film’s success, but also because Grey and Minnelli turned in indelible performances on screen and in the recording studio.

It was also nominated for Best Picture and Best Adapted Screenplay, but lost both to The Godfather. As a result, Cabaret holds the somewhat dubious distinction for winning the most Academy Awards while not winning the Best Picture award.