You are here: Home / Music / Garage Rock / Song Of The Day – “You’re So Good To Me” by Debra Swisher 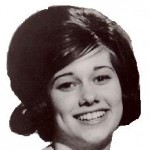 She was originally the lead singer of Pennsylvania girl group The Pixies Three whose Mercury Records single “Birthday Party” made it into the top 40 in 1963. Then she met up with the production group of Jerry Goldstein, Bob Feldman and Richard Gottehrer who produced and wrote the hits “My Boyfriend’s Back” for The Angels, “I Want Candy” by The Strangeloves (who were marketed as a group from Australia but were in fact Goldstein, Feldman and Gottehrer themselves) and “Hang On Sloopy” by The McCoys. When they met up with Swisher in 1966, they decided to record her covering this Beach Boys classic…and another garage gem was born. Criminally, the single didn’t get any chart action and she went on to join The Angels. Richard Gottehrer went on to launch the legendary Sire Records label with Seymour Stein who recorded everyone from the Ramones to Madonna to Talking Heads.