You are here: Home / Archives for Jerry Goldstein 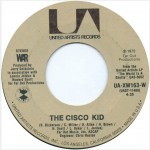 The Jukebox Series #92 – WAR: “The Cicso Kid” b/w “Beetles In The Bog”– United Artist UA-XW163-W Welcome back my friends, to the series that never ends… When they first began recording, it was Eric Burdon and WAR and WAR was billed as the backing band for Eric Burdon of The Animals. The group was the brainchild of Burdon and Jerry Goldstein who was a member of The … END_OF_DOCUMENT_TOKEN_TO_BE_REPLACED

She was originally the lead singer of Pennsylvania girl group The Pixies Three whose Mercury Records single "Birthday Party" made it into the top 40 in 1963. Then she met up with the production group of Jerry Goldstein, Bob Feldman and Richard Gottehrer who produced and wrote the hits "My Boyfriend's Back" for The Angels, "I Want Candy" by The Strangeloves (who were marketed as … END_OF_DOCUMENT_TOKEN_TO_BE_REPLACED