You are here: Home / Archives for Average White Band 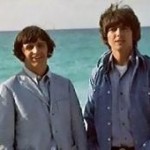 1967, The Beatles record the piano chord used on “A Day in the Life.” David Crosby pops by Abbey Road studios for a visit. 1968, The Who appeared at the Fillmore West in San Francisco. 1968, Genesis releases its first single, “The Silent Sun.” Peter Gabriel and Tony Banks later say they wrote the song […]