You are here: Home / Archives for Jack Teagarden

This gem comes from relatively early in Benny Goodman’s career. He had only begun leading a big band a year or two earlier and he was beginning to make a name for himself and feel his first brushes with success while performing at and broadcasting from the Palomar Ballroom in Hollywood on the “Let’s Dance” radio program. From there it was on to the Congress Hotel in Chicago … END_OF_DOCUMENT_TOKEN_TO_BE_REPLACED 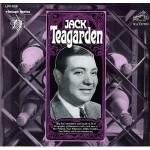 Singer, trombonist, Jack Teagarden, came from a musical family. His mother taught piano, his father was an amateur trumpeter and his siblings were also professional musicians. “The Big T” sang like he played trombone very lyrically and infused with the blues. During the 1920s he collaborated with the cream of the Jazz crop including Bix Beiderbecke, Fats Waller, Benny Goodman, … END_OF_DOCUMENT_TOKEN_TO_BE_REPLACED