You are here: Home / Music / Big Band / Song Of The Day by Eric Berman – “Get Happy” by Benny Goodman & His Orchestra 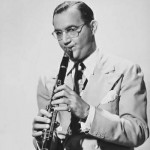 This gem comes from relatively early in Benny Goodman’s career. He had only begun leading a big band a year or two earlier and he was beginning to make a name for himself and feel his first brushes with success while performing at and broadcasting from the Palomar Ballroom in Hollywood on the “Let’s Dance” radio program. From there it was on to the Congress Hotel in Chicago where more popularity followed when this recording was made in March of 1936. Featured here are the triple threat trumpets of Bunny Berigan, Pee Wee Erwin and Ralph Muzillo, the great Jack Teagarden on trombone, Gene Krupa on the drums, Toots Mondello on alto sax, Allan Reuss on guitar, brother Harry Goodman on bass, and, of course, Benny Goodman on the clarinet, all performing a stellar Spud Murphy arrangement. It would only be a matter of time before the great Harry James would be added to the ranks. You can practically see Goodman’s fingers flying up and down the licorice stick while listening to this standard written by Harold Arlen and Ted Kohehler. The song would later become the property of Judy Garland, but for now, it was Goodman’s to own…and he did.