You are here: Home / Archives for Joakim Noah 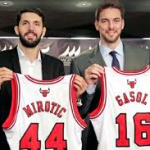 It’s hard to describe the feelings I have when talking about this upcoming Bulls season. I would compare them to a first date… with a girl you have known for a while but have never had the stones to ask out. You two have flirted off and on for years, but have never given a real relationship a try. When she was single, you had a girlfriend and vice versa. A dating opportunity … END_OF_DOCUMENT_TOKEN_TO_BE_REPLACED

The Chicago Bulls came into this summer's blockbuster free agency period with one big target on their minds, unfortunately for them, they came away with a "Plan B operation." While it was disappointing not to land one of the most proficient scorers of the past decade, it may go down as the best alternate plan in Chicago basketball history. The Bulls challenged Carmelo … END_OF_DOCUMENT_TOKEN_TO_BE_REPLACED 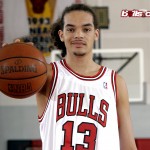 From the Chicago Bulls and news wires.... NEW YORK, June 4, 2014 – The Oklahoma City Thunder’s Kevin Durant, the 2013-14 Kia NBA Most Valuable Player and winner of four scoring titles in five seasons, highlights the 2013-14 All-NBA First Team.  Durant was the lone unanimous selection, appearing on all 125 ballots as a First-Team pick while LeBron James of the Miami Heat … END_OF_DOCUMENT_TOKEN_TO_BE_REPLACED 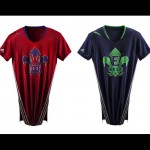 The NBA All-Star Game is supposed to showcase the best talent in the league and reward players who are putting together exceptional seasons. Unfortunately, the 12 most deserving players from each conference are rarely selected to the team, thanks in large part to fan-voting. Before voting concludes on Tuesday, I have put together a roster of the players who should find … END_OF_DOCUMENT_TOKEN_TO_BE_REPLACED 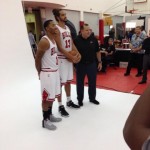 The last time we saw Derrick Rose on a basketball court he was being carried away, squashing all dreams of an NBA Title for the Chicago Bulls and their fans after suffering a torn ACL. Last season, Derrick sat out to continue rehabbing his surgically repaired knee causing a huge stir from media and fans as they wondered why his rehab was taking so long. Fast forward two … END_OF_DOCUMENT_TOKEN_TO_BE_REPLACED