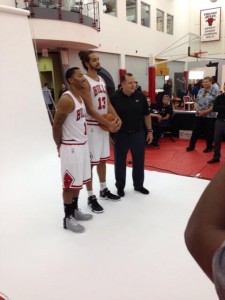 The last time we saw Derrick Rose on a basketball court he was being carried away, squashing all dreams of an NBA Title for the Chicago Bulls and their fans after suffering a torn ACL. Last season, Derrick sat out to continue rehabbing his surgically repaired knee causing a huge stir from media and fans as they wondered why his rehab was taking so long.

Fast forward two years, Rose is now healthy and ready to help the Bulls contend for a NBA Title and a chance to dethrone the two time NBA champs, the Miami Heat. The Bulls players and coaches definitely seemed confident and ready to start the season on Friday when they hosted media day at the Berto Center to kick off the 2013-2014 Season.

Bulls general manager, Gar Foreman, was the first person to address the media Friday and answered all of the questions concerning the former MVP Derrick Rose. Not only did he address if Derrick would play in the preseason, but stated “Derrick should play in every preseason game”, and when asked about minutes said “It will remain fluid as we go” (Click below for more audio of Gar Foreman speaking at Bulls Media Day).

Gar Foreman was not the only person who seemed confident and ready to see Rose return to the court. Bulls head coach, Tom Thibodeau, also acknowledged how big the former MVP’s return would be saying this would be, “a very special year”.

Thibs also responded to those who criticized Derrick last year by saying, “[they] didn’t know what the hell they were talking about”. Coach Thibodeau also talked about all the hype and expectations the Bulls will have this year stating, “The pressure of expectations are really a privilege”( Click below to hear more from coach Thibs).

The media then rushed over to the podium where they would finally hear from Derrick Rose. Derrick answered all of the questions regarding his health and said he was ready to play, and that his goal for this year was “to win a championship.” Rose also said last year he didn’t feel comfortable coming back because “he wasn’t sure he would be able to handle a double team” (Click below for the full Derrick Rose interview).

Bulls fans had to breathe a sigh of relief after hearing Rose would be ready for the season and for good reason. The Bulls will bring back one of the best starting lineups in the NBA with Derrick finally being able to start in the same backcourt as third year shooting guard Jimmy Butler, who had a strong sophomore campaign last year for the Bulls.

Starting at the forward spots will be Luol Deng, (who brushed off contract talk on Friday) and Carlos Boozer who is coming off his best season so far with the team. The man in the middle is Joakim Noah, who also seems to be healthy this season after battling plantar fasciitis all of last season. With a lineup like that its no wonder NBA analyst and former Bull, Steve Kerr, has predicted the Bulls to win the NBA Title.

The Bulls will also bring a deep bench to the table with veterans like Taj Gibson who worked in the offseason on improving his low post scoring,and Kirk Hinrich who returns to Chicago to provide leadership and solid perimeter defense.In the offseason, the Bulls added Mike Dunleavy to the team for more 3 point shooting after finishing last season as one of the leagues worst shooting teams from the field.

With Derrick Rose’s penetration, and improved 3 point shooting, this just may be the Bulls’ year.