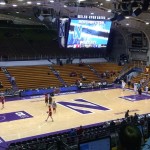 When you think tradition in college basketball, you have to think Indiana University. The Hoosiers are five-time National Champions; they have made eight Final Four appearances, won 21 Big Ten Championships, and produced 44 All-Americans and 74 NBA Draft picks. Not too shabby at all. The Northwestern Wildcats (14-14,5-10) on the other hand have produced a few solid … END_OF_DOCUMENT_TOKEN_TO_BE_REPLACED