You are here: Home / Archives for Richard Harris

1968, Herb Alpert started a four week run at number one on the singles chart with "This Guys In Love With You." It was his first chart topper, plus first number one for the A&M label, as well as for writers Burt Bacharach and Hal David 1968, The Rolling Stones go to number one in the UK with "Jumpin' Jack Flash." It was the first time they had visited the top spot in two … END_OF_DOCUMENT_TOKEN_TO_BE_REPLACED

Who knows what was going on in songwriter Jimmy Webb’s mind when he wrote the somewhat nonsensical lyrics to this song, but one thing for sure is that it is a classic brought to the upper regions of the charts not once but twice. Richard Harris was known primarily as an actor and not a singer which can be evidenced on any of his albums, some of which are quite the … END_OF_DOCUMENT_TOKEN_TO_BE_REPLACED 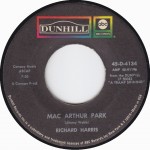 Song Of The Day by Eric Berman – The Jukebox Series #18 – Richard Harris: “MacArthur Park” b/w “Didn’t We” – Dunhill 45 RPM Single D-4134 (O2/P2) “The Jukebox Series” focuses on the 80 records that inhabit my 1963 Seeburg LPC1 jukebox. I’ve had my jukebox (or as I like to call it “the prehistoric iPod”) for a little over … END_OF_DOCUMENT_TOKEN_TO_BE_REPLACED