You are here: Home / Archives for Robert Palmer

This is the opening triptych of songs from Palmer's debut solo album from 1974. But it wasn't the first time we heard from Palmer since he had been a member of the band Vinegar Joe before this releasing three critically acclaimed albums that were ignored by the public during the early '70s. "Sailing Shoes" was a Little Feat cover written by Lowell George. The band backing … END_OF_DOCUMENT_TOKEN_TO_BE_REPLACED 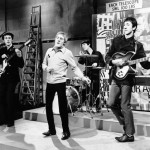 1965, The Who are scheduled to play an 8pm show at the Aarhus Hallen in Aarhus. The audience pelts the opening acts with bottles and trash and turns into a rioting mob by the time The Who take the stage. The band makes it through half of one song before fleeing for their lives, as the audience storms the stage and smashes the instruments. Pete later calls it "the best concert … END_OF_DOCUMENT_TOKEN_TO_BE_REPLACED

Like his good friend R.L. Burnside, Junior Kimbrough hailed from northern Mississippi and didn’t find fame until relatively late in the game. Kimbrough recorded sessions in the 1960s and 1970s that went mostly unreleased. It wasn’t until music critic Robert Palmer produced his first record for the Fat Possum label in 1992 that Kimbrough attained national attention. Kimbrough … END_OF_DOCUMENT_TOKEN_TO_BE_REPLACED