You are here: Home / Archives for Susan Tedeschi 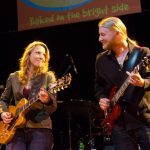 For my 60th birthday last month, my middle son and his girlfriend took me to the Dead & Co. opening night at Charlotte’s PNC Amphitheater. Turn about being fair play and, with no regifting involved, I took them to hear the Tedeschi Trucks Band at the North Carolina Music Factory for her birthday.  The Music Factory, now rebranded with the name of some software company … END_OF_DOCUMENT_TOKEN_TO_BE_REPLACED

Found has a lot of different meanings. From Middle English founden, from Old French fonder, from Latin fundre, from fundus, bottom. The first known Use of the word found was in 1793. Not only that, it is an aircraft manufacturer based in Ontario, a SciFi novel, a band from Canada, and an unfinished oil painting by Dante Gabriel Rossetti. It could be a transitive verb - … END_OF_DOCUMENT_TOKEN_TO_BE_REPLACED