You are here: Home / Featured Music / Song of the Day – Temples: “Colours To Life” 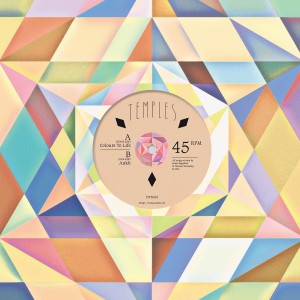 Today we’re going to go WAAAAYY back to the year 2012. In Kettering, England, singer/guitarist James Edward Bagshaw and bassist Thomas Edward James Walmsley form the band Temples and release their debut single “Shelter Song”. The next year they release this sparkling gem of psychedelic goodness, “Colours To Life”, as a single.

With Bagshaw evoking the late, great Marc Bolan with his vocals and even more so with his look, the band deftly mixes influences from the Beatles, the Moody Blues, and Sixties psychedelia in general to create this masterpiece of spinning, swirling, soaring sonic serendipity. They make no bones about their influences, a check of the “now playing” entries on their website reveals many classic psych and prog albums. Perhaps I like this particular example of their sound so much because I’m a devotee of Epiphone hollow-body basses (check out Walmsley’s SWEET Rivoli in the video), as I own and play one (Jack Casady Signature model), but give it a listen and I think you, too, will enjoy it even without a gear infatuation.

After the release of “Colours To Life”, Bagshaw and Walmsley added drummer Samuel Lloyd Toms (also from Kettering)and keyboard player Adam Smith so they could begin to play live. After touring through the latter part of 2013, they released their debut album Sun Structures (which also includes this song) in early 2014. As of mid-2015, they indicated they were working on a follow-up album. Those of us who know and love prog and psych eagerly await its release.